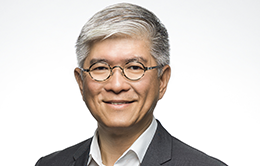 Mr Thomas Pang was appointed to the Board of M1 on 11 June 2019.  Mr Pang is the Executive Director and Chief Executive Officer of Keppel Telecommunications & Transportation Ltd.

Prior to that, he was an investment manager with Vertex Management (United Kingdom) from 1998 to 2001. Mr Thomas Pang was also the Vice President (Central USA) of the Singapore Tourism Board from 1995 to 1998, as well as Assistant Head (Services Group, Enterprise Development Division) at the Economic Development Board of Singapore from 1988 to 1995, where he was responsible for local enterpise development.

Mr Pang holds a Master of Arts (Honourary Award) and a Bachelor of Arts (Engineering) from the University of Cambridge.